Late afternoon winds finally picked up, bringing with it a 15-degree (F) temperature drop from the low-90s that had lingered for much of the day. A dark grey loomed to the west. The smell of rain could just barely be detected following behind the flocks of ducks pushing east towards Nebraska.

Our trailer sat on a small graceful hill in the middle of untouched prairie just 10 miles outside of Cheyenne, WY. I called out to our new beagle, “Scout” who was trotting freely in no particular direction. He didn’t pay attention to me, thus I followed through knee-high spear grass, flax and tiny ground cacti. “Scout!”  I called again.

When I reached him, I picked him up and began the slow walk back to the trailer.

The world of RVing would seem like a perfect place for an introvert like me. I could camp in some remote area, find privacy, and be able to move my entire “home” within minutes to another place. But yet, it’s still very a much a social community. Wherever you are, you are always only minutes away from friends, family, or others who know you on social media. I could, if I wanted to, just not tell anyone where I am, and therefore slip through unnoticed. But that’s not how I am. I often document on Instagram of my current whereabouts. I even upload a video now and then to YouTube. People know that I’m in their neighborhood, and thus there’s this pressure to crawl out of my safe space and put on my social face.

Sash, by contrast, is more extroverted. She loves the interaction with people, and people seem to love meeting her. It’s also good for our business as marketers that she reaches out publicly and announce our whereabouts, because she gets invited to events, businesses, and people’s homes.

So, we got invited to camp on 1,500 acres of private property just outside of Cheyenne, WY. Sash’s social media friend Kristy had been following each other online for some time, and finally we were in her neighborhood. Initially, we camped right behind her house, where she had RV hookups for 50 amp electrical, water, and sewer. Kristy often has RVing friends visit. But after a week, we moved our trailer to a more remote area of their property, about a mile away on rolling hills and low-lying grasses. It seemed idyllic, especially during the late afternoon breezes. 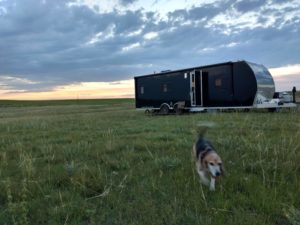 I guess the introvert in me wants more alone time. I need my moments to think, wonder, and imagine. It helps me in my website development projects and in my creative writing. I still enjoy hanging out with Kristy’s husband over craft beer and jerky. But, camping on someone’s private property makes you feel inclined to spend more time socializing with your hosts. That is, it feels intrusive to camp on their property and not spend any time with them.

It’s also difficult to feel privacy as an introvert when you’re camped behind their house. I assume that extroverts may feel completely opposite in such a situation, that they might feel protected and surrounded with friends. But instead, I tend to feel this mix of pressure to socialize and this anxiety knowing that my privacy is about as extensive as a fitting room at a department store.

It was a coincidence, actually, that we adopted our new beagle Scout only days after arriving at Kristy’s property. Kindness Ranch Animal Sanctuary, located about two hours of north, instructed us to keep Scout free from other dogs for at least two weeks. So, moving our trailer to another area of their property, where none of their dogs could reach us, gave me the extra week I needed to find some valuable separation from humanity.

Sash and I have received several offers from other people to park our trailer on their property, and we’ve kept those offers in our pockets because sometimes they have the best advantages. But on the other hand, camping on public lands, particularly areas where there are little to no people, is still my favorite option as an introvert. My brain tends to think without pressure that way.