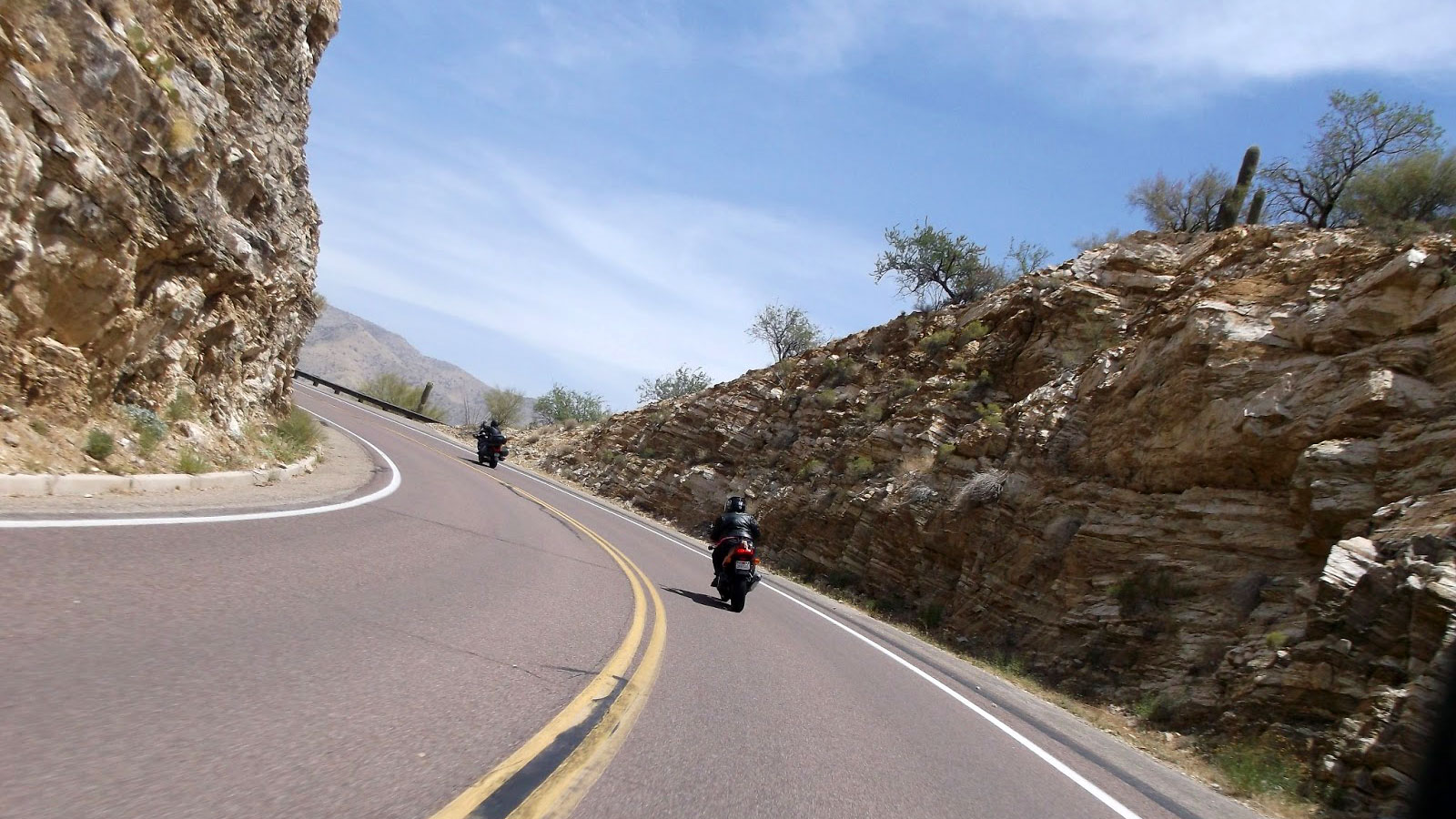 Catalina Highway, also known as Mt. Lemmon Highway, and officially name, General Hitchcock Highway, is probably the best motorcycle riding to be had in the Tucson, AZ area.

Roughly a 30 mile jaunt that ascends Mt. Lemmon, the road takes numerous sweeping curves winding its way up to an old ski resort some 8,000 feet high.

The experience was made all the better after Sash and I hooked up with a fellow motorcycle blogger, Paul, who blogs under the handle, Arizona Harley Dude.

Sash and I picked him up further north at the Tom Mix Memorial along SR79, a place where the famous serial cowboy laid down and died. From there we headed into Tucson, on our way to Catalina Highway.

To get to there we had to endure something like 10 miles of intersections, traffic, and stop lights, all under 90 degrees of full sunshine. Not exactly blazing hot, but hot enough to make you want to cool down. So when we finally began making our ascent up the mountain, I could feel every one of the degree temperature drops and drew a bigger sigh of relief as I watched the numbers tick down on my dashboard.

With a big heave to the left and then a big heave to the right, it was largely smooth sailing and nary a car or truck to slow us down. Our bikes seemed to glide like slaloming on fresh powder as my attention was tugged back and forth by the beautiful rocky mountainsides and the road in front of me.

Sash remained behind me and behind her Paul took up the rear. I couldn’t help watching Sash in my mirrors. Being that she was still a new rider, I was concerned about her taking these twisties. But she seemed to do fine, and as we continued along, she was handling turns at faster speeds.

Reaching the summit, the temperature dropped to the upper 50s. But under a cloudless sky, the sun managed to keep things warm.

Lunch at the Sawmill Run Restaurant topped off the afternoon with juicy burgers and sweet potato tots.

I think, however, that the day was made all the better having Paul with us on the ride. Thus far, with just Sash and I, there can be a sense of loneliness leaving your hometown behind. Even though we can keep in touch with our friends back home on Facebook and e-mail, there’s nothing more satisfying than having another friend with us in person.

It’s also cool that the three of us could sit down for lunch and compare notes on our favorite motorcycle bloggers, talk about what we thought of their posts, and who we’d like to meet. It brings a little bit of community back to Sash and I.