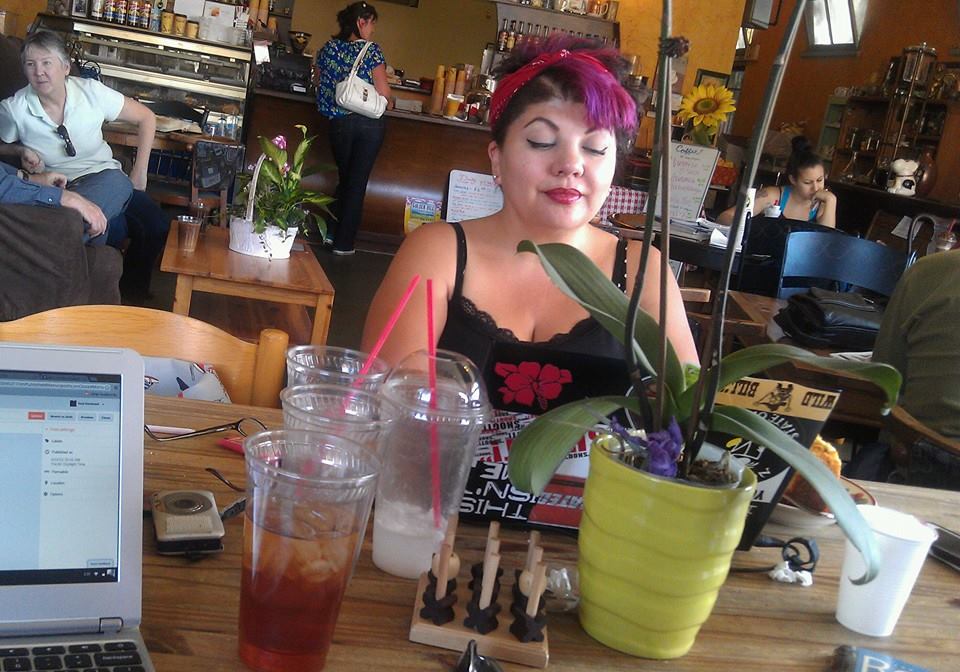 Rebecca’s Coffee House slowly filled with a group of unfamiliar faces, dressed in garb almost costume-like, but seemingly fitting for the eclectic clientele putting in orders for chai tea latte and vegan muffins.

Since Sash and I first visited this place in San Diego’s bohemian-like South Park community, it’s been her favorite hangout.

Crude paintings of musicians, dimly lit lamps, and earth-tone painted walls surround the unmatched, shabby-chic furnishings.  The place looked like it had been an old mattress store in the 1920’s and then hastily covered over with paint and decorations without having first swept the cobwebs.

It seems the perfect venue for a monthly open-mic poetry reading.

Troubled minds and lonely souls often seek refuge in their prose and meter.  Sash began writing poetry in her teens, during some tumultuous years of physical, emotional, and sexual abuse.  Later in life, she managed to publish them in a book entitled, “Finding Christ Inside“, which despite sounding like a tribute to the late water-walker, is actually about reaching deep inside herself for the last saving grace of innocence.

A man with one arm sits right in front of me in a wheelchair, alone, with folded sheet of paper on his lap.  His problems seems many, while his calm demeanor and polite manner does its best to dissociate from his emotions as he waits his turn to speak.  A group of four men, cackling and giggling like little boys, managed to grab the best seats in the house before anyone else claimed them.  Meanwhile, a staff of workers behind the bar work hastily to complete those orders of chai tea lattes.

South Park sits along the southeast border of Balboa Park, San Diego’s largest, oldest, and famous city park.  But when I grew up in San Diego during the 1970s, I never recalled a community called “South Park”.  There was North Park, where I lived, and then there was Golden Hill.  In the 1990s, as blight spread its way through Golden Hill, a section to the north managed to remain quaint, trimmed, and populated by upper-income.  Real estate agents wanting to distance themselves from Golden Hill, coined the name “South Park”, and managed to break off the northern chunk from its mother-community.  Residents of South Park seemed to like the change.

Rebecca’s Coffee House seems a perfect fit for the community.

It’s famed Whistle Stop Bar entertains a clientele of 30-something computer geeks with live mixtures of folk, rock, and ska.  Sombrero Mexican Food on Fern St. has become so legendary, a local alternative-rock band weaved it into a song.  Along the sidewalk of 30th Street, a couple of lovers sat by the window of Mazara Trattoria, illuminated by a candle between them.

It just so happened the Grim Reaper made an appearance at Rebecca’s, reciting lines of prose that somehow sounded meant for me.  I had to take a photograph just to make sure it was just a guy in a costume.  It was.

Sash finally takes her stand behind the mic and reads a poem she wrote.  The room grows quiet.  Her voice, amplified through a speaker, still echoes throughout the room.  It’s not just the words, but also the delivery, and Sash seems to have both down pat.  The room goes into applause, and she finds herself on an adrenaline rush.

She’s followed by a guy dressed in off-white corduroy with a matching fedora, looking almost like Darrin McGavin in an episode of The Night Stalker.  His voice erupts with the loudest volume, and his arms stretch out, making a facial expression of a high school teacher berating a student for being late.  We’re all fixed to his delivery, hanging on his every word.

The one-armed guy in a wheelchair makes his way to the microphone.  He speaks of “dark”, “grey”, “ass licking”, “fucking sure”, and “dropping kids on their head on a travertine floor”, in poems with titles beginning with the word, “Rant”.

A slender lady shrouded in a gray cloak, looking lonely and depressed, spoke heartfelt words that even pulled tears from her own eyes.

A skinny old man, dressed in black with a black hat, speaks into the microphone sounding exactly like Ren, the cartoon chihuahua.  His poems reek of Edgar Allen Poe, of similar meter and rhythm, and after the evening concluded he spontaneously erupts with prose as the groups exits.

South Park doesn’t have any hotels or motels, and I don’t even recall seeing a hostel anywhere here either.  Your best bet is to find a vacation rental on Airbnb.com or VRBO.com.