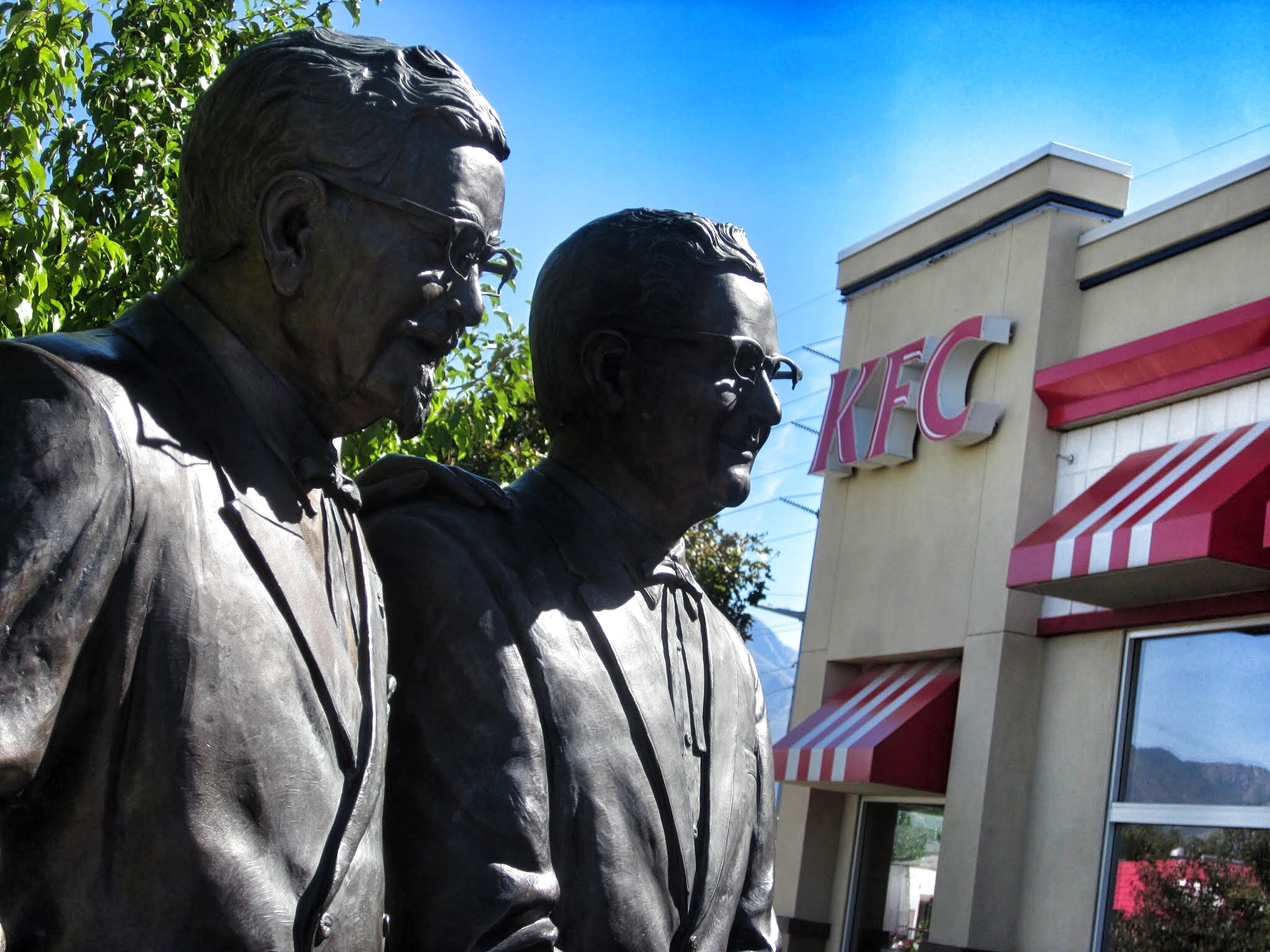 With 13 million people eating its fried chicken each week at over 17,000 locations in 115 countries, it’s hard to think that Kentucky Fried Chicken wouldn’t be what it is today if it weren’t for the folks in Salt Lake City, UT.

It was in 1951 that Colonel Harlan Sanders met Leon “Pete” Harman in Chicago at a restaurateurs convention.  At the time, Sanders owned “Sanders Court & Cafe” in Corbin, KY, while Harman owned “Harman Cafe” in South Salt Lake.

The following year, Sanders visited Harman in Salt Lake City, and introduced his secret recipe of 11 herbs and spices.  After Sanders cooked up a batch of chicken, they agreed on a deal to serve the Colonel’s chicken in Harman’s restaurant.

The first thing Harman needed was a name for the fried chicken dish, finally settling on “Kentucky Fried Chicken”, since Sanders was from Kentucky.  The Colonel would earn $0.05 for each piece of chicken sold.

It was a success.

People waited in lines to get some of the Colonel’s famous chicken.  In the years following, Harman streamlined his restaurant to serve up more chicken, including introducing a take-out version and the famous bucket of chicken.  Both Sanders and Harman worked together to create the present-day Kentucky Fried Chicken restaurant model.  To this day, all KFC outlets are based on the Harman model.

Harman’s Cafe still exists, though today it’s been remodeled into a prototypical looking KFC.  However. the location on the corner of State Street and 3300 South is more like a hybrid restaurant and museum.

There’s a bronze statue of Colonel Sanders and Pete Harman outside, smiling as they watch hundreds of thousands of hungry chicken masticators enter through the doors.  Inside are several old photos of the Colonel and Harman posing together, along with photos of the original restaurant, menus, and newspaper clips.  On display is one of the actual white suits that Sanders wore, along with one of his original pressure cookers.  There’s a few display cases of old KFC memorabilia, while several of the tables are laden with old photos and tidbits of KFC history.  You can buy KFC souvenirs there too.

A ghost is said to haunt this restaurant. An old employee of this KFC, from the original building, watches over the location. Next to the order counter is a frame of several employee photos. Two of the photos are missing. Every time the two photos are put inside, they are removed and laid on the floor. Supposedly, the ghost keeps taking them out.

The first KFC in the World is no longer owned by Pete Harman.  It’s now owned by Tracy Gingell, who’s run the restaurant the past 20 years.  However, the worldwide success of KFC has turned his outlet into a tourist mecca.  While Sash and I were there, several Chinese came in to peruse the restaurant’s historical offerings.  Apparently, the Chinese regard Colonel Sanders and KFC as some kind of mythical “Old West” Americana much in the way Americans regard the Dalai Lama.  Beijing regularly sends its tourists to “Harman’s Cafe” to re-energize their Chakras with the 11 herbs and spices.