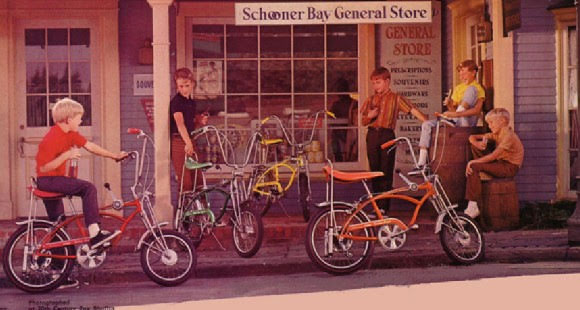 The Schwinn Stingray was the bicycle every boy wanted in 1971. I was no different. So when my mom and dad bought it for me for Christmas, I about blew up in excitement.

Actually, I hadn’t yet learned how to ride a bike without training wheels. I was only 6 years old then. But the beauty behind the Stingray is that its seat could be adjusted to any height. It was a bike that kids from 5 to 15 could ride.

“Don’t let go!” I shouted to my Dad, as he held on to the back of my orange-colored pride and joy, running with me as I pedaled nervously.

The neighborhood seemed to grow larger the more I continued to pedal. I was discovering new worlds. I turned down a different street, and then turned down another, riding past houses I had only been able to do from the backseat seat of our family car. I made another turn, and another, feeling free and limitless with my new bicycle.

But he didn’t stop.

I turned my head, and he wasn’t there. I was alarmed to realize I was probably a mile from home, well into a new neighborhood, and he was nowhere to be seen. I remember stopping the bike myself, staring behind me, and feeling all alone in a strange neighborhood. It was a profound moment however. Maybe other 6 year old boys might have felt traumatized in being abandoned so far from home. But in me, it imprinted confidence in my abilities, which eventually led me into becoming a traveler.

He had let go somewhere along the way. I figured I had pedaled so fast, he couldn’t keep up. But the truth is that I was doing fine on my own, and I only needed him to hold on for a short bit.

And when I got back home, I found him reading the newspaper. It was if he already knew I’d be fine.

The Navy has a way of separating little boys from their fathers. The words, “War is Hell”, has more than just one meaning. My parents were waging a war with each other as well, and looking back at it now, I think my dad was preparing for an exit.

A year later, they started divorce proceedings, and I saw less and less of him. He wanted to start a new life, and a few years later, married another woman who gave him a new son. And despite me pulling on his arm to stay, he had to let go.

In my adult years, I had tried to reestablish that father-son relationship I knew from my childhood, but as it turned out, I wasn’t a child anymore. In his mind, he had given me up to my mom and had dug himself in with his new wife and son. He always welcomed me to visit, but it was clear his interest wasn’t with me. I had grown resentful because I felt robbed of a relationship that I deserved to have.

But Life was never meant to be fair. Those who complain will never move on, and those who never move on will always be left behind. That’s the lesson I learned. Yet, he was there in my life just long enough to leave a mark on me.

But I realize now that my father’s death was the start of a new relationship with him. He’s no more farther away than my voice or my thoughts. I believe he understands me clearly now, and knows that I never really said goodbye. I now have a direct, unfiltered line of communication to him.

The truth is that I was able to build a successful career in the software industry. I went on to start  my own website development business. I rode a motorcycle from San Diego, CA to Fairbanks, AK, and from coast-to-coast, and all over North America. Today, I’m just idling by in an RV though still running the same business. By most standards, I’ve done well for myself, and never had to ask anyone, nor my parents for money.

And yet to this very day, in my 50s, I still look behind me to see if he’s back there, keeping me from falling down. But I realize that I never needed my dad. I always had a piece of him in me.

I only needed him to hold on for a short distance until he felt confident enough to let go.