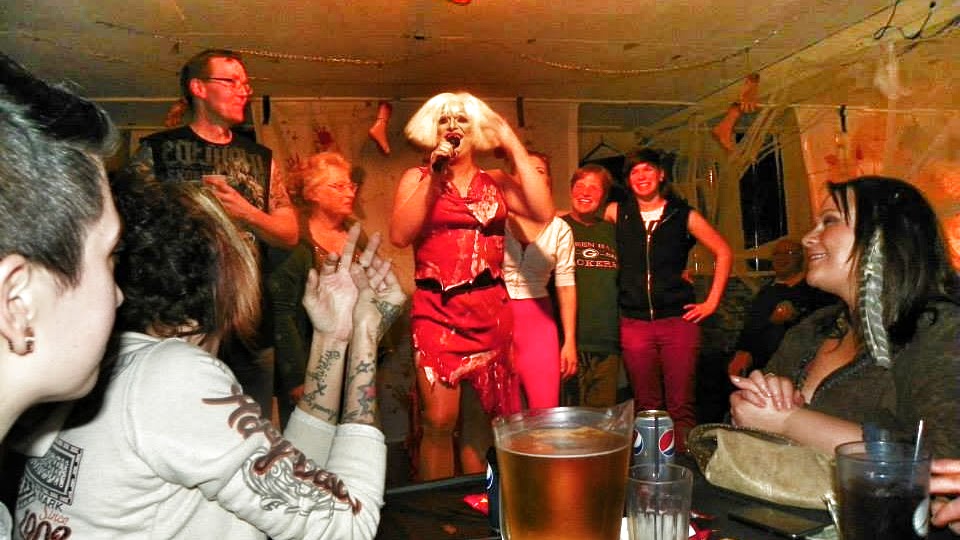 Steve’s Place in Burlington, IA may not seem like much of a place from the outside, and if you haven’t read about it, you’ll likely pass it by.

During the day, it’s a quiet place to get a cheap beer and a decent lunch for not a lot of money. But by night, the place gets packed, loud, and frenzied.

“The Place to Be” is it’s tag line, with the emphasis on the word “Be”.

It’s not just about being some place fun and cool, but about being yourself. Steve’s Place is host to drag shows, where guys (and girls) get be themselves, their inner-characters, and express thoughts and feelings they couldn’t express elsewhere, especially from inside the corn belt of conservative America.

The owner of the bar, Steve, was kind of enough to give us a complimentary helping of his homemade potato salad, just because he had so much of it. And because Steve owns the building and the land underneath it, he’s able to charge lower prices for food and drink. We had two Philly Cheese Steaks, a Pabst Blue Ribbon, and two cans of 7-UP, for a total of $12.00. And that doesn’t count the $4.00 tip we left him.

Interestingly, while we were there, Steve showed me how to use a paper thong, I suppose for those moments when you need a thong, and forgot to bring one.

But I couldn’t get over how beautiful downtown Burlington, IA is. The 19th Century architecture filled me with awe. The views of the Great River Bridge spanning the mighty Mississippi River, with a sea of right-angled brickwork, give the sense that a town here is just itching for revitalization.

However, the Mississippi River is just not the mighty avenue of commerce it once was. With the growth of rail, air, and ground cargo, Old Man River has become more of a recreational thoroughfare. And when the Interstate system was developed, the City of Burlington was left out of the plans.

But after spending a couple of hours at Steve’s Place, I wonder if revitalization would push this little bar and night club out of business.