After a night in Tucumcari, NM, we left in the morning headed to north along the US-54 headed to Nara Visa, and then to Clayton. But there was trouble.

The battery light on my truck came on, indicating something went awry with the battery (or alternator). I wasn’t ready to suspect the alternator because I had just put a new one in about a month earlier.

Which could mean only one thing. The belt broke.

Now about 20 miles out of Tucumcari, I asked Sash to look up GMC dealers in Amarillo, TX, figuring a dealer shop would have all the parts on hand to deal with this. But Sash wasn’t comfortable with me driving truck another 90 miles with no way to keep the engine cool.

“As long as we keep the truck moving…” I said, “The engine won’t overheat.”

But Sash was having none of it. So, I turned the truck around and headed back to Tucumcari. She found a repair shop on Yelp and called ahead. The guy there, Todd, said he’d check it out as soon as well get there. 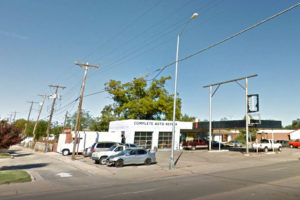 Todd’s Garage turned out to be a real savior. Todd and his buddy (I forget his name), worked on it right away, and within seconds could tell the belt was gone, and then seconds later could tell the belt tensioner was completely toast. Todd checked the Napa Auto Parts store in town, and found they had a brand new tensioner in stock, along with a new belt. The parts came within minutes. It didn’t take long at all to get everything back together and running again.

Todd’s Garage didn’t try to upsell us or recommend stuff we didn’t need. They were honest, friendly, and prompt. And here we were, totally at their mercy.