Sash and I finally got out of New Mexico and pulled into Liberal, Kansas.

Kansas turns out to be quite a meat lover’s paradise. Even though Texas often is associated with the beef industry, those folks in the Sunflower State really like to dress up a slice of steer and introduce it a sizzling hot grill, so much so, that it’s a lesser-known destination for all things meat.

Places mentioned in this video 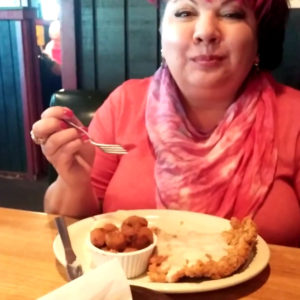 Cattleman’s II Cafe in Liberal, Kansas doesn’t look like a place that would do well in metropolitan settings, but in the ag towns of south western Kansas, it’s a well known destination for a wholesome plate of meat and potatoes. Their chicken-fried steak is a stunner. Thick slice of pounded steak, breaded crispy, and then souped into a thick country gravy with a side of mashed potatoes. Just sitting inside the restaurant we could hear other customers calling for this one-of-a-kind piece of Americana.

You don’t taste only the breading like other places that serve chicken fried steak, instead you mostly get a mouthful of steak. The way our grandparents and great grandparents used to eat it.

But we were also told the rib eye steak at Cattleman’s drew in diners from as far as a 100 miles away. To make it right, Sash ordered the Chicken Fried Steak while I requested the rib eye. What came out was a 12 ounce steak prepared the old fashioned way, pan fried in butter. I know that aficionados in the big cities want their steaks grilled over a flame, brushed only with olive oil. But this is Kansas!

You don’t come here for contemporary dining, instead you come here to eat the same way Americans ate 150 years ago. And the price? Yes, it’s old school pricing too, about half of what you’d pay in the bigger cities. In fact, Cattleman’s II Cafe is so old school, they don’t even have a website. You’ll have to just to take Google Map’s word on it… 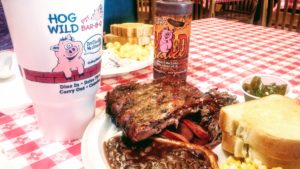 Hog Wild BBQ in Wichita, KS is a local chain with an emphasis on a family-friendly atmosphere, quick service, and awesome Kansas City-style barbecue.

The BBQ is actually quite good here! I had the half-rack of St. Louis style pork ribs, along with beef brisket, and sausage. Sash had the pulled pork. The ribs are the “fall off the bone” type, but laden a good deal of sticky-sweet sauce and a nice smokey flavor.

The sides of mashed potatoes, corn, and cole slaw seemed rather bland, but then again, this is in the heart of the America, and not the spicy-seasoned palates of California that we’re used. We also were disappointed in the small selection of sauces on the table (just mild and spicy). However, Hog Wild BBQ still put its money where it’s mouth is, and that’s the meat. You’ll find great value for your money, along with fast service.