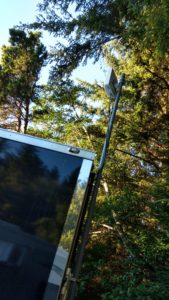 When it comes to improving your 4G LTE signal, you have two choices: use an antenna, or use an amplifier.

A 4G LTE antenna is not the same as an amplifying device such as those made by WeBoost, HiBoost, and SureCall. Those devices pick up faint 4G LTE signals and make them louder so that your cellphone, router, or hotspot device can “hear” them better.

An antenna doesn’t boost a signal, but rather, it casts out a wide net to “scoop up” as much signal as it can, and then channels it down to your cellphone, router, or hotspot.

Amplifiers have a huge downside. They also boost the noise. Hence, if you are already getting fair to moderate signal, an amplifier will actually make things worse due to a higher signal-to-noise ratio. On the other hand, an antenna does not increase noise; it just catches more signal.

Amplifiers tend to outperform antennas when you are moving down the road. On the flip side, antennas only work better when stationary and pointed directly at the signal source. Truckers prefer amplifiers because it lets them use their cellphones while traveling.

I chose to set up an antenna because it’s lot cheaper than buying an amplifier. A good amplifier may cost up to $500.00, whereas an antenna will run between $50.00 to $100.00. Also, I don’t need my 4G LTE signal when I’m driving; I only need it when I’m sitting down doing my website development work. Hence, getting a directional antenna, seemed the better choice.

Before Buying an Antenna

Note that you need a hotspot with TWO antenna ports. This is because 4G LTE technology was designed to use two separate antennas for input and output. Many older 4G LTE hotspots came with just one antenna port for both input and output, which prevented users from getting the most out of an antenna.

Amplifiers, on the other hand, perform better when plugged into only one antenna port. So, if your hotspot has only one port, you may as well pony up the extra dough for an amplifier.

What Kind of Antenna to Buy 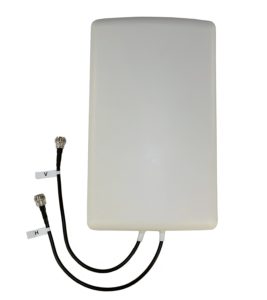 Make sure it’s a MIMO antenna (multi-in, multi-out). This means it contains two separate antennas, one positioned horizontally, the other vertically. There should be two separate antenna output jacks. It should also be labeled “4G LTE”. Most of them will actually say that it’s compatible with Verizon, AT&T, etc.

Here is the antenna I bought: https://www.amazon.com/gp/product/B01NBSLNJ6/

You can also buy Yagi antennas, which are designed for 4G LTE use. These are awesome antennas. However, these typically are sold as one single antenna, meaning you have to buy two. You will then need to mount them together, but one positioned horizontally (flat) and the other vertically (up), in order to prevent them from interfering with each other. Or, you can just buy what I bought.

You will also need to buy extension cables, one for the horizontal and one for the vertical. These must be shielded cables, because the longer the cable, the more signal you will lose. Make sure this cable is labeled for Radio/RF use, and not for Wi-Fi or television use.

Here is the cable I bought (make sure to buy two): https://www.amazon.com/gp/product/B00QZEQ5EA/

You will also need to buy adapters that transfer from a SMA jack to a T-9 jack. The SMA jack is what radio antennas use, whereas the T-9 jack is what all hotspots use.

Here is the adapter I bought (make sure to buy two): https://www.amazon.com/gp/product/B00WA6JJVS/

Lastly, get yourself some weatherproof tape designed for coaxial connectors, and seal the connections from rain.

Here is the tape I bought: https://www.amazon.com/gp/product/B00K4PZ9NO/ 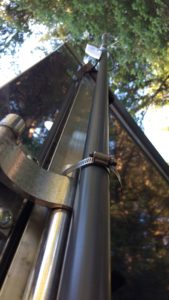 The antenna I bought comes with a bracket that will hold it a pole. So, I went to a home improvement store and bought a 10 foot grey PVC pipe (I didn’t want white PVC). I also bought two steel ribbon clamps (screw clamps) to hold the pipe to my toy hauler’s ramp door latch.

4G LTE antennas like the one I installed are directional. That is, they have to be pointed in the direction of the nearest cell tower. As a result, they only work when you are stationary, like parked at a campground, or on the roof of your house. There are, however, omni-directional antennas designed to be used while moving. These are not as effective as directional antennas. Don’t buy those.

Download and install the “Open Signal” app on your phone or tablet. It will show you which direction your current signal is coming from.

Now, point the antenna in that direction, then secure it tightly so that it doesn’t move.

All together, this set up cost me about $250.00. That’s still half the price of a WeBoost unit ($500.00). Had I bought the WeBoost, I might have had to spend more money for additional parts to make it work in my rig. 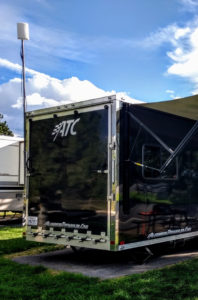 I was able to increase signal strength (decibel gain) by about +20 db.

Interestingly, the manufacturer of my antenna advertised a gain of between +7 db to +10. Yet, we were getting far more than that.

At the RV Park in Crescent City, CA, before I had set up the antenna, we could not get a good enough signal to connect and remain connected. Our signal strength would waver between -116 db to -120 db. Keep in mind that -120 is the weakest signal possible.

But with the antenna, I was getting signal strength of -95 db to -97 db, and was good enough to let me do my website development work.

Also note that a -95 db signal, running on slower 3G speeds (which I am often on due to Verizon’s 10 gb throttling limit) is still plenty fast for FTP use, and still fast enough to stream video.

How Does That Compare to an Amplifier?

WeBoost typically advertises a gain of +55 db to +70 db on the use of its amplifiers. Of course, that’s way better than the +20 db I’m getting. However, remember that an amplifier only works in cases like what we had in Crescent City, where there was practically no signal.

On the flip side, in areas where you have fair to moderate signal, an amplifier will actually make it worse.

And because Sash and I plan to stay in RV Parks and campgrounds where there is at least a fair to moderate 4G LTE signal, I don’t think we will ever need an amplifier.

What I Would Do Differently Now

After using this antenna set up for a few weeks now, I would definitely get shorter extension cable. The 25ft cable is way too long. Remember that signal will actually weaken as it passes along the cable. Albeit the cable I bought is shielded for low-loss, there is no such thing as zero-loss cable.

I could probably do better with just 10 to 12 feet of cable.