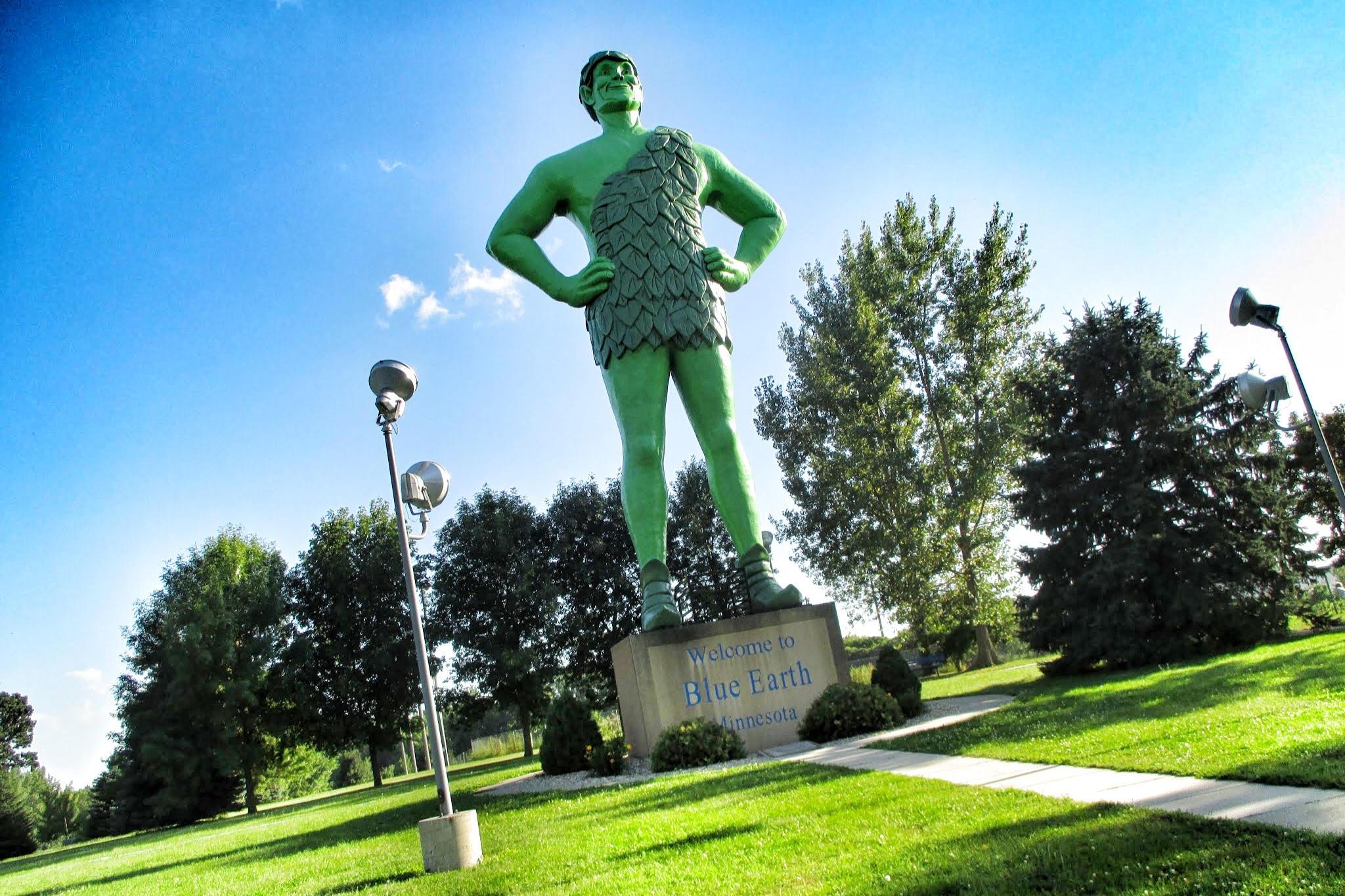 Just off the I-90 in Blue Earth, MN, stands a 55 1/2 foot tall statue of the “Jolly Green Giant”, the corporate symbol of Green Giant brand of frozen and canned foods.

It was actually a Facebook friend of mine, Stephen Johnson, a fellow craft beer aficionado (who happens to share my name), that told me of this place. He had onced lived in Blue Earth. And since Sash and I were riding through there, we decided to investigate.

Green Giant maintains a rather large footprint in the south-central portion of the Gopher State. Many of its vegetables are grown in this area, an agricultural region known as “Minnesota River Valley”, stretching from Le Sueur in the north to Blue Earth in the south.

In 1903, the Minnesota Valley Canning Company set up packing operations in Le Sueur. It wasn’t until 1925, that a new breed of green pea was developed, resulting in unusually large peas, that the company developed the “Green Giant” brand. By 1929, the Jolly Green Giant mascot was refined to its present-day design. In 1950, the Minnesota Valley Canning Company changed its name to “Green Giant”.

In the 1970s, Paul Hedberg, who owned a local radio station in Blue Earth, had been doing radio interviews of travelers driving through town along Highway 169. After each interview, he gave them cans of Green Giant corn and peas. When Hedberg learned that the new I-90 Interstate would run through Blue Earth, and that Blue Earth was where the west construction team would meet the east construction team for a dedication ceremony, he came up with the idea of erecting a large statue of the Jolly Green Giant.

Hedberg contacted Green Giant and got their permission to use their famous trademark. He raised funds locally, building up donations totalling $50,000.00. Initially, the statue had been erected at the site of the I-90 dedication ceremony on September 23, 1978. It wasn’t until July 6, 1979, that the statue was moved to its present location inside Green Giant Statue Park, where it oversees the annual Faribault County Fair.

Since that time, the Blue Earth Chamber of Commerce has set up a Green Giant Museum in town.

Today, General Mills, who now owns Green Giant, still has canning facilities in Le Sueur, as well as Blue Earth, along with its main packing operations in nearby Montgomery.