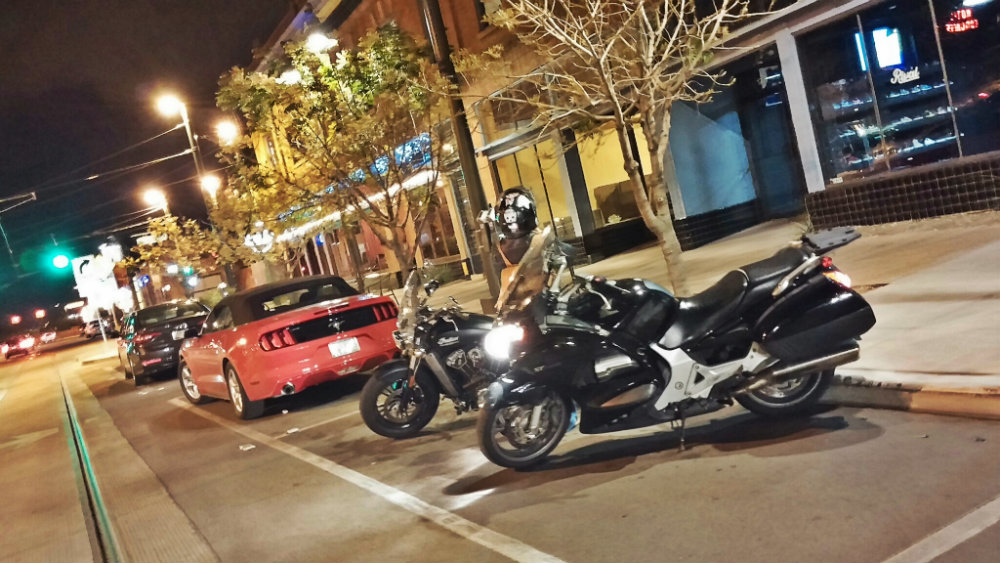 Checked into our hotel in Bakersfield, CA on Monday, March 30, after spending nearly a month in Arizona. Spring time in the nation’s 48th state is a showcase of colors across the Sonoran Desert, with swashes of green, yellow and purple, and dots of red, orange, and white interspersed between Saguaro Cactus and Ocotillo.

The three weeks we spent in Tucson introduced us to new motorcycling friends Mike & Chris, a German couple who emigrated some 20 years ago, and are now active in the Royal Enfield Club of Southern Arizona. Sash and I were charmed by their old world accent and hospitality. Chris had been following Sash on Facebook for a couple of years since we started Road Pickle. When Chris realized we were headed to her home town for a few weeks, she reached out to Sash and arranged for us to meet. During our stay in Tucson, we were invited to their house for dinner twice, went out for dinner twice more, and rode together on bikes down to Patagonia. The two of them even spent an afternoon together shopping.

During the last week in Tucson, we were reunited with Stephanie Yue, the Vespa Vagabond who’s been making her rounds across North America for almost a year now. We first met her in South Dakota last summer and shared a cabin with her at the Sturgis Motorcycle Rally. A couple months later, we met again in Las Vegas and shared a hotel room for Las Vegas Bikefest. This time around, we let her take the couch inside our suite here in Tucson.

We invited Steph to Calle Tepa Mexican Grill & Bar in Tucson in exchange for her sharing her road stories of venturing into Baja California, slurping lobster tails with other Bohemian refugees and getting a first-hand education on how bumpy and primitive the roads are. I wasn’t laughing however, quite the contrary, I was in awe of this solitary gal taking a little scooter designed for short-hop sprints to coffee shops over the rocks, potholes, and soft sand of Mexico’s Pacific Coast.

As for local rides around Tucson, Sash and I did the shorter trip to Mission San Xavier Del Bac. I also did the ride over Gates Pass, which I’m told is a popular route for local riders. I already mentioned the afternoon ride to Patagonia. I had also contemplated the ride up to Mt. Lemmon, which is the best riding in Tucson. But I had already done it during Road Pickle 2013, and I was more intrigued in sampling the local craft breweries instead. Stephanie opted to ride Mt. Lemmon, however.

We finally checked out of our hotel in Tucson on March 25 and headed north to Scottsdale to attend Arizona Bike Week. Stephanie actually followed us up there, and for a brief moment, it was like riding together in a pack. We stopped at the place where long time television cowboy Tom Mix met his fate, and later had lunch at this tiny mexican joint in Florence.

Scottsdale, along with the greater Phoenix area, was quite the contrast to Tucson. It’s a huge metropolitan area and it’s competely congested with traffic. Sash spent a couple of days at Bikefest while I stayed away, opting to find coffee shops where I could set up my laptop.

Sash and I left Scottsdale on Sunday, March 29, headed into California on our way to Bakersfield, to spend a couple of weeks visiting her daughter and grandson. Stephanie parted ways by taking a direction east, with an ultimate goal of reaching the farthest tip of Maine by July.

The ride into California was largely along Interstate 10, which is actually a pretty ride during the Spring. Temperatures across the greater Gila River Valley reached only into the upper 90s instead of the 100s it often gets at this time of the year.

Lunch at Taco Mio in Quartzsite proved to be a great choice for their assortment of tacos and homemade salsas.

We spent the evening in Indio, CA, resting our tired bodies and weary minds at a bar inside Fantasy Springs Casino.

The next morning, Sash actually went her own direction into San Diego to meet with famous female motorcyclist, Brittany Morrow, otherwise known as “Road Rash Queen“. Brittany’s story of surviving a nasty motorcycle crash years ago went viral on the Internet. She has since gone on to become an advocate of wearing full riding gear, doing speeches and appearances at various motorcycle events.

I went on to Bakersfield to check into our room. Sash finally joined me the next day.