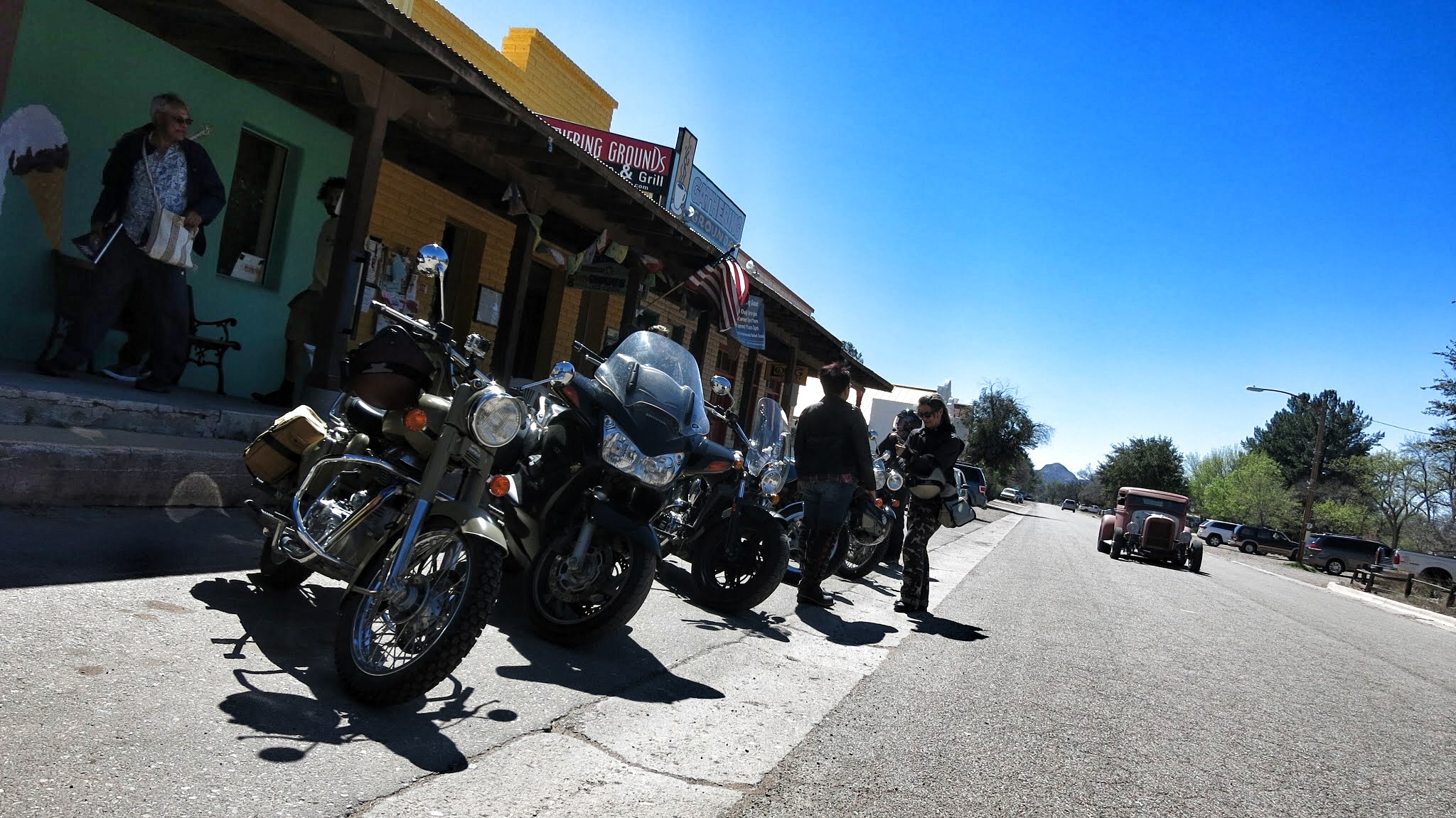 Patagonia, AZ is one of those touristy little towns nestled within rolling hillsides and national forests that motorcycle riders often go to as an afternoon destination.

While Patagonia is a great little town, with a handful of restaurants, coffee shops, and knick-knack stores, for the most part it’s just a town that motorcycle riders pick out because it makes for a great ride.

In the case of riders in the Tucson, AZ area, you have your choice of taking the more scenic AZ-83 and AZ-82 highways, or the more direct route via I-19. On this particular ride, we took the former.

I had ridden to Patagonia in years’ past, as part of a week-long motorcycle trip through Arizona. But I hadn’t stopped in town before. This time, I was excited to try out some of the local fare.

The ride was actually organized by a group of Royal Enfield riders based in Tucson. Our new friends, Mike & Chris, invited us in on the ride. We staged up at Scoot Over, a local scooter shop that also sells Royal Enfields. Mike rides a Desert Storm edition Royal Enfield. I’m not sure exactly which model his wife Chris rides. We also met Mack, who rides a Royal Enfield Bullet 500.

Also in on the ride was Margaret, who recently restored a 1978 Hondamatic CB400A, with the two-speed automatic gear box. Margaret, who is quite tall for a woman, dwarfed the little 400, though the bike seemed to haul her quite quickly down the road.

Anyone who knows Tucson, knows that the city is particularly lacking on expressways. You have to go through a lot of stop signs and traffic signals to get out of town. But we got far enough south, that old familiar thrill of riding a motorcycle really kicked in.

AZ-83 and AZ-82 are two highways that take riders through the southern Arizona towns that dot the Coronado National Forest area. The scenery here is fraught with rolling hills, oak trees, and grasslands. It’s also close to the Mexican border, and the occasional border patrol vehicles can be spotted hiding out in the brush.

Patagonia is part of what’s known as the Southern Mountain Area of Arizona. It was included in the Gadsden Purchase of 1853. As it was annexed into the United States, the region saw a silver mining boom. Patagonia emerged as a center for several nearby mining towns and ranches. Today, Patagonia is a refuge for artists and a favorite destination for tourists.

We had lunch at Velvet Elvis, a pizzeria in town, that’s been well-documented on television, newspaper, and magazines across the country. They have a pizza called “The Inca Quinoa” made with quinoa flour in a deep skillet, and layered with vegetables and cheeses. This pizza requires a 24-hour advance notice, because it needs two chefs to prepare it. Unfortunately, we didn’t know about this ahead of time.

But Velvet Elvis does offer some of the softest, tastiest, whole wheat rolls I’ve had in a long while.

Gathering Grounds is a cool little coffee shop also in town, and I found they make a killer cappucino.

I found only one gas station in Patagonia, but they looked closed when I was there. Otherwise, there’s a Shell Station in Sonoita, about 12.5 miles east along AZ-82.